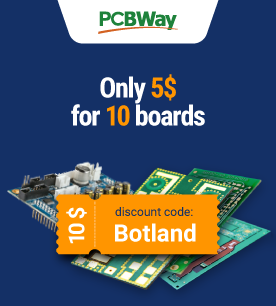 Four-wheeled educational robots are the devices that most resemble cars you see every day. It is an optimal solution that allows you to move smoothly and steadily even with a lot of load. Such educational robots make a lot of fun for the user, but above all they are very practical. Self-construction of the robot, and then programming the controller in such a way that the device "comes to life", equips the user with a range of skills and practical knowledge of mechanics, programming, electronics, automation and robotics.
Expand... Collapse...
Products: 4
Loading... 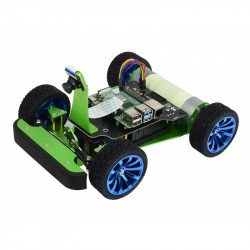 A kit to build a 4-wheeled PiRacer DonkeyCar racing robot platform based on the Raspberry Pi minicomputer. The robot allows to detect objects and move autonomously. It is...
Index: WSR-16403
Index: WSR-16403
Shipping in 24 hours
Available
Check quantity 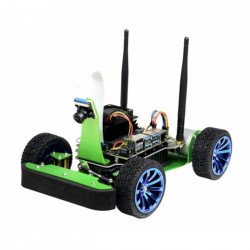 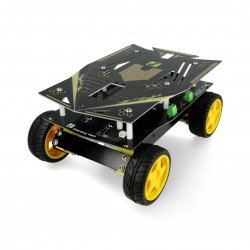 Four-wheeled robot platform compatible with most popular Arduino modules. Cherokey has a built-in L298P motor controller that supports two motors with voltage from 6V to 12V...
Index: DFR-15091
Index: DFR-15091
Only on request
Waiting for confirmation of delivery date 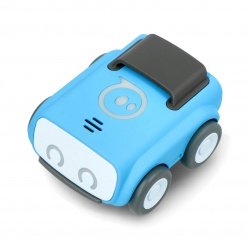 Indi is a car-shaped driving robot created by Sphero. The Indi robot helps to teach STEAM at the elementary level in an accessible way to children from the age of 4 . It...
Index: ALS-19939
Index: ALS-19939
Product unavailable
No confirmed availability date

Four-wheeled robots are very similar in appearance to the cars that many people drive on a daily basis. Some of them work exactly the same way - the rear axle is stationary and there is also a drive, while the two wheels on the front axle can turn parallel (so the car is able to turn). Another type of four-wheeled vehicles are mobile robots using caterpillar drive. Devices that use this technology often perform much better in more difficult terrain (for example on carpets or in forest litter). However, it is worth remembering the consequences of using such a type of drive - a tracked mobile robot will need more energy while driving, which will affect the maximum working time and maximum developed speeds.

Why is it worth investing in a four-wheeled educational robot?

Nowadays, ignorance of today's technologies is often an obstacle for many people. In the near future, knowledge and proficiency in the use of the latest technologies will often be required to get a job - creative thinking and programming skills will be even more valued on the market, and jobs that do not require human thinking will be eliminated by more efficient and financially viable robots. That is why it is worth supporting the young generation today, for example by giving your child the opportunity to develop his or her passion with the help of an educational robot. An interest in the subject of electronics and robotics will ensure that he or she will have better learning outcomes and that in the future, the job he or she likes can also be his or her job and source of income.

What exactly do we offer in this category?

It is a common practice for a manufacturer of educational robots to allow the user to assemble the device himself. The kit usually includes detailed assembly instructions and an explanation of the steps to follow, so that the young robot can learn the basics of electronics and mechanics, combining theory with practice. The culmination of the whole process is to write and implement the program directly into the robot's logic system (often the manual also includes a section on this part of the work). Other robots are ready-made platforms with built-in sensors and devices to perform tasks, which can be edited and expanded by the user. The next important step is to program the device so that it starts working properly. This is a great way to learn how to program robots in an interesting way. Of course, the manufacturer often provides sample programs, thanks to which the robot can start working immediately. For younger electronics, there are also devices that can be easily programmed using the special "Scratch" language. A tailored programming environment allows you to create programs using both graphic blocks (version for the youngest) and assembling ready-made code sequences into the whole program (version for more advanced programmers). Some of the devices are designed in such a way that using the same parts, you can build a completely different vehicle. For example, there is a product "Velleman KSR11 RobotKit 3 in 1", which can be built as a multi-tracked rover overcoming every obstacle, grab or forklift. It is worth investing in a four-wheeled educational robot that will help your child or you to have a good time, learning valuable knowledge and improving practical skills.