Since the first microprocessor systems for civilian use were put into mass production, electronics and computer science have only strengthened their ties and the number of common points. This technical symbiosis, resulted in the emergence and growth of a new field, that of embedded systems. Microprocessors and microcontrollers have over time become present in an increasing number of devices, both in consumer and professional use. Still, many devices based on programmable electronic circuits use potentiometers and encoders as external controls. The Gravity series of potentiometers and encoders from DFRobot are definitely a must-have for prototyping new electronics projects! Our range includes encoders and rotary and slide potentiometers.
Expand... Collapse...
Products: 4
Loading...

The DFRobot module with 10-turn potentiometer with the  resistance of 10 kΩ. The kit also includes a cable with a female connector, pitch of 2.54 mm.
Index: DFR-03906
Index: DFR-03906
Shipping in 24 hours
In stock, shipping 24 hours!
(Check quantity) 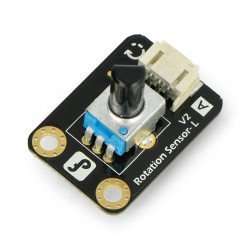 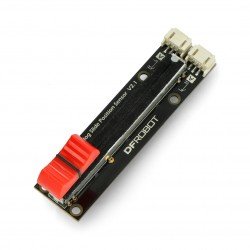 Slide linear potentiometer with the resistance of 5.4 kΩ. It is equipped with two 3-pin connectors that enable the direct connection of the module to the development board IO...
Index: DFR-11258
Index: DFR-11258
Shipping in 24 hours
In stock, shipping 24 hours!
(Check quantity)

DFRobot Gravity - Thumb Joystick with a button - module with a plate

The module is equipped with a joystick similar to analog devices used in, for example, in controllers for games. There is the possibility of detecting movement in two...
Index: DFR-11283
Index: DFR-11283
Shipping in 24 hours
In stock, shipping 24 hours!
(Check quantity)

Encoder - not to be confused with a potentiometer!

An encoder is an electromechanical element which makes it possible to control operating parameters of many different machines and devices, e.g. measuring and diagnostic equipment, audio amplifiers, welding machines as well as control panels of industrial robots. In contrast to the similar external design and the way it is operated manually, the encoder differs significantly from a typical rotary potentiometer. Instead of a carbon track with a lead, the encoder uses a miniature disc with regularly shaped notches. The rotational movement of the shaft with the encoder disc occurs in increments rather than continuously. Each single jump of the encoder disc is converted into an electric impulse which is counted by a counter in order to process this signal e.g. to change the output volume of an amplifier or to select a parameter to be edited on the display.

Rotary potentiometers - not only analogue technology

Potentiometers are actually resistors with variable resistance, the adjustment of which is done manually in a continuous manner. A typical potentiometer has three leads. By combining them with other components in an electrical circuit, you can influence individual circuit parameters such as the cut-off frequency of a filter, the fill factor of a rectangular signal, or the output volume of an audio amplifier. Rotary potentiometers are not only used in analog circuits, but also in digital circuits. For example, the famous Arduino prototyping boards, in addition to digital pins, are also equipped with an analog pin section. By connecting the middle lead of the potentiometer to one of the analog inputs ("A0" - "A5") and connecting the other two leads to the GND and 5V pins, you can realize a project of a manual speed controller for electric motors or a dusk switch with a manually set threshold.