The designers at DFRobot have created the Gravity series, which includes high-quality hardware expansion modules that you can plug into an Arduino or other single-chip minicomputer. The Gravity series also includes color and light intensity sensors, whose design is based on photodiodes as well as UV sensors. By performing light intensity measurements and studying the color composition of light, we can build various devices triggered by such sensors. Such constructions include automatic garden lighting controllers, lighting effects, and advanced models of experimental robots. Light and color sensors from the Gravity series communicate with base modules via the I2C bus.
Expand... Collapse...
Products: 11
Loading... 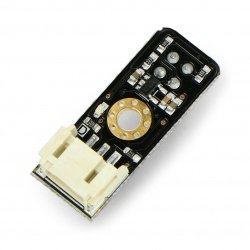 Digital sensor of tracking the line, reflective for Arduino, it can detect the white and black lines. Separate signals provides a stable output signal TTL, so it looks for more...
Index: DFR-11273
Index: DFR-11273
Shipping in 24 hours
In stock, shipping 24 hours!
(Check quantity) 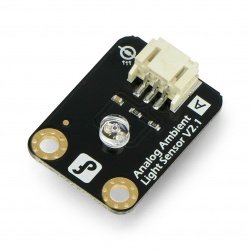 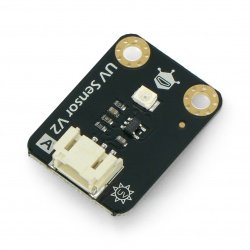 The UV light sensor is powered with the voltage of 5 V. The output is an analog voltage, proportional to the intensity of UV light intensity. The sensor can be used to detect...
Index: DFR-05517
Index: DFR-05517
Shipping in 24 hours
In stock, shipping 24 hours!
(Check quantity) 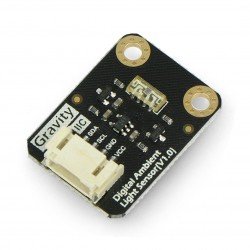 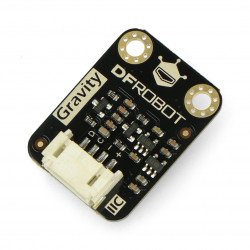 The PAJ7620U2 based gesture sensor can recognize up to 13 different hand gestures at a distance of 20 cm. The module communicates using the popular I2C interface. It is...
Index: DFR-16576
Index: DFR-16576
Shipping in 24 hours
Available, 24h shipping!
(Check quantity)

Analog grey sensor which is able to measure the light intensity from black to white. Scale of gray is also defined as black and white, with the darkest shade of gray as black...
Index: DFR-11255
Index: DFR-11255
Shipping in 24 hours
In stock, shipping 24 hours!
(Check quantity) 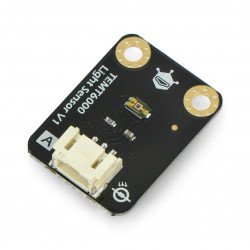 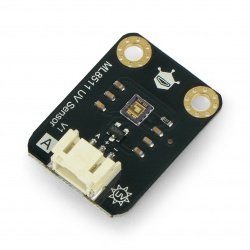 Analog UV light sensor powered with the voltage of 5 V. The output is an analog voltage, proportional to the intensity of UV light. The sensor can be used to detect harmful...
Index: DFR-11260
Index: DFR-11260
Shipping in 24 hours
In stock, shipping 24 hours!
(Check quantity) 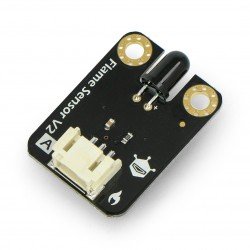 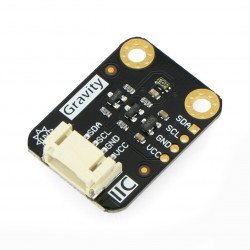 Sensor based on Vishay chip VEML6075 detects the UV light band, both UVA and UVB with a resolution of 16-bit. The module converts the intensity of UV light to digital output....
Index: DFR-15296
Index: DFR-15296
Shipping in 24 hours
Available, 24h shipping!
(Check quantity) 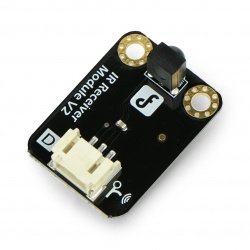 The IR receiver from the Gravity series, operating at a frequency of 38 kHz with a voltage of 5 V. The module allows to receive commands from the IR transmitter. The...
Index: DFR-11267
Index: DFR-11267
Waiting for delivery
Unavailable

In light sensors, the first link in the measuring system is a photosensitive element, which is most often a photoresistor. It is a photosensitive resistor whose resistance changes depending on the intensity of light falling on its surface. When a photoresistor has a very high resistance at its terminals, it will be inaccessible to light. On the other hand, as a result of exposure to light, its resistance will decrease accordingly as the intensity of light falling on its surface increases. Photoresistive light intensity sensors may be used to build a twilight automatic device. In such a device, measurement of voltage drop on the photoresistor is performed in real time. After reaching a sufficiently low light intensity, in response to the measured value of the threshold voltage, the automatic device switches on the power supply of the external lighting (in order for the automatic device to work properly, the photoresistor sensor should be placed in a place which is optically inaccessible for the light from the lighting installation which is controlled by the device). Even more accurate measurement can be obtained using photodiode sensors. In photodiode, current flow occurs as a result of receiving light, which causes the release of electrons present in the structure of photodiode p-n junction. The current flowing through the photodiode is greater the higher the intensity of light reaching the photodiode.

In addition to standard solutions for light intensity and color scale measurement, we also offer custom solutions, such as gray scale sensors. The Gravity series grayscale sensor has been designed to perform light intensity measurements in the full range of colour grayscale. Such a sensor functions on the basis of the so-called optocoupler, which is a photoresistor combined with an LED diode. The grayscale measurement proportionally represents the light intensity emitted from the LED to the photoresistor. The Gravity series grayscale sensor is an analog sensor - the output signal from the sensor should be connected to one of the sockets in the "ANALOG" section of the Arduino base board. We also offer high quality licensed Arduino clones, such as the DFRduino from DFRobot. The most popular application where measurements are made with grayscale sensors is photography. When we take a picture with a digital camera, the reflected light from the environment is passed through RGB filters and it is converted into individual pixels of the photograph whose colors are determined according to the grayscale. You can also use the grayscale sensor to build a line follower robot.