3D VR glasses are the primary component of a virtual reality system. They deliver data to your eyes to create the illusion of depth and three-dimensionality. VR glasses generate two independent images - for the right eye and the left eye. These images are a bit different from each other, because they are obtained from two cameras (whether real or virtual, such as in a game), spaced a few centimeters apart. Exactly the distance as the spacing of our eyes. Thanks to the fact that the shifted images reach us, stereoscopic vision is possible. This gives a perfect optical illusion of reality. Hence the origin of the name - virtual reality.

Glasses are designed to view 3D videos or play games in virtual reality. Place them in a smart phone running a dedicated application. It has aspheric lenses which do not...
Index: ZAS-07390
Index: ZAS-07390
Shipping in 24 hours
Available 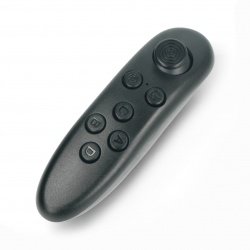 VR glasses are widely used in video games, but are also used in other applications, including simulators and trainers. They include a stereoscopic head-mounted display (providing separate images for each eye), 3D glasses, stereo sound, and very often also head-tracking sensors that may include gyroscopes, accelerometers, magnetometers, structured lighting systems, etc. In addition to entertainment applications (for gaming or watching 3D movies), such systems are often used to train doctors, especially surgeons, and professional soldiers.

Requirements to be met by the VR glasses

Creating a virtual reality system, especially 3D glasses, is not a trivial matter. Poorly designed devices will not give the full effect of three-dimensionality, and in addition may cause users nausea, dizziness or eye pain. VR glasses must have low latency so that the image responds quickly to movement. The image must also have a high enough resolution that pixels are not visible, especially if the VR system you are using has a wide viewing angle. A key component of any 3D glasses are the lenses that map the image from the flat-panel displays to the user's eyes to provide a realistic and non-eye-straining image.

Smartphones as devices for a VR system

Some VR glasses use smartphones to control virtual reality and display a 3D image. This is not an unreasonable approach. First, almost everyone owns this kind of device. Second, modern cell phones have high-end displays that have sufficiently low latency as well as high resolution to work well as a display for 3D glasses. Sensors such as accelerometers and digital gyroscopes are built into modern smartphones, making it easy to use them in a virtual reality system.