DJI Mavic Drones is an amazing series of drones, mainly intended for more ambitious entertainment purposes. These machines, however, can also be useful in shooting professional films and taking pictures of city panoramas, etc. Mavic drones produced by the well-known company DJI from Schentzen delight with a multitude of functions and quality of individual elements. These are machines that will provide you with excellent photos and videos. The DJI company specializes in the production of high-class drones and is a real giant in its class. It offers professional, small flying machines that are perfect for professional aerial photography, film sets and for amateur flying with photography. The Mavic series is one of DJI's most comprehensive product lines. Be sure to read the drones in this category carefully. All DJI drones are new and original. Check also the other subcategories with accessories and drone controllers. Enjoy your shopping!
Expand... Collapse...
Products: 1
Loading... 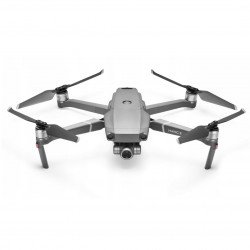 The drones from the DJI Mavic series are small and very light drones that are perfectly flown in the air, so they can be an ideal solution for more demanding beginners. The compact design of the drone conceals modern devices and electronic systems that make it much easier to pilot the drone. The quality of photos and videos is at the highest level. You will have no problems taking pictures or filming objects even in Full HD quality and in difficult weather conditions. Another important advantage of DJI Mavic drones is their very good flight range and long operation time of the built-in batteries. Such drones are suitable not only for professional use on film sets or taking interesting photo sessions. These are devices that already touch the more professional segment of drones. Due to its low weight, the devices from this series can be used during short family walks or during trips, during which you will be able to easily capture the stunning landscapes around you. The design of the drone allows for easy transport and safe preparation for flight and folding after work.

Mavic flying machines are equipped with a number of modern functions that make them much easier to control. You can control these drones with a classic controller, but you can also buy amazing FPV multimedia goggles (First Person View). Machines from the DJI Mavic series have also been equipped with modern cameras with CMOS sensors. This is a guarantee of outstanding image and film quality. You can record in the air even in 4K and 30 fps quality - depending on the type of device. Pictures can be taken in very high resolutions, on the richest versions of Mavic the resolution is up to 20 Mpx. DJI is known for its intelligent software that allows even a small child to fly the drone. In this case, special algorithms allow you to select the appropriate lighting and the correct focus, regardless of the prevailing weather conditions or position during the flight. Moreover, DJI Mavic drones are capable of capturing up to 1 billion colors (older versions of the Mavic Pro had 'only' 16 million colors). In addition, DJI Mavic drones are equipped with modern sensors that make piloting much easier, helping to avoid obstacles. Thanks to this, even if you make a mistake, there is a good chance that the drone will react by itself and avoid the obstacle automatically!

DJI Mavic drones allow you to professionally photograph or film in the air. With them you will be able to record beautiful bird's-eye views in the highest quality. In each DJI Mavic kit available in the Botland store, you will also find a transmitter that provides contact with the flying machine and allows you to easily pilot it. The manufacturer, DJI company, additionally equips the sets with an intelligent battery. This is a phenomenal solution available in richer versions of the product, which allows us to fly continuously for over 30 minutes. In a situation where the battery is almost discharged and the machine is still far from us in the air, the drone will automatically return to the starting point at the right moment. By choosing recommended DJI Mavic kits, you will also receive an additional emergency transmitter stick, charger, transmitter cables and three spare propellers for the drone. Should you need other DJI Mavic accessories, just check out the rest of the Botland Store Product Categories. DJI Mavic drones are great flying machines - we highly recommend them and wish you many successes in your further sky travels!